Ni Jean, ni Marie-Madeleine English version Link below Neither John nor Magdalene Who are the characters in this image? Of course, everyone will have recognized the character on the right: it is ...

Who are the characters in this image?

Of course, everyone will have recognized the character on the right: it is Jesus. But who is the one on the left? Some will think they recognize John, the beloved disciple, often represented as follows at the Last Supper:

One of his disciples, the one whom Jesus loved, was at the table close to Jesus. Simon Peter beckons him and says: “Ask which one he is talking about.” The latter, leaning then towards Jesus’ breast, said to him: “Lord, who is this?” (John 13: 23-25).

In the stream of the Da Vinci Code, others will claim that this famous and beloved disciple is not John but that it is in reality Mary Magdalene, who is supposed, according to them, to be the wife or the companion of Jesus. So, what is it really?

First of all, it is clear that the author of this image was indeed inspired by the episode of the Last Supper as it is recorded in the Gospel of John. The beloved disciple is depicted in a similar posture, leaning on Jesus’ chest and in the guise of an effeminate, even asexual young man.

Stained glass window at the Church of The Blessed Sacrament (established in 1902, Albany, New York)

One detail in our image, however, attracts attention. Unlike Jesus, John and other saints, our young figure does not wear a halo.

In good practice, the first question that must be asked is where does this image come from and, possibly, who is the author. Those who disseminate it on the Internet present it for their part as illustrating the close relationship uniting Mary Magdalene and Jesus: a union not only mystical but sexual according to them, from which children would come from and from which themselves – the so-called “desposynis” – the would be the descendants… In fact, the character could be a young woman and one notices, moreover, the unusual presence of roses in the background, a flower that some associate with Marie-Madeleine. However, the character appears very young and, as we said, he does not wear a halo.

A problem arises, moreover, as to the exact origin of this representation which, at the time of this writing, is not traceable on the Net. Why? The reason is that the image has been retouched and its original meaning distorted. At the last stage (stage 3), the image was inverted and the colors softened. But here it is now, as it can still be found at the previous stage on many other pages and websites in the wake of the Da Vinci Code (stage 2).

This apparently doesn't change much. However, thus positioned, it is now possible, by carrying out searches via google images, to know the origin (stage 1).

So here is the original image. It dates from the years 1929-1935. This is a drawing of Italian origin illustrating a “certificate” of First Communion (in other words, for the faithful, the first Eucharist or first sharing of bread = the Host), hence the reference to the Last Supper and the presence of the chalice. The character on the left (now on the right) is not a saint, hence the lack of a halo. If he indeed occupies the place of John (the youngest of the disciples, according to tradition), he represents in this case, the young boy or the young girl, still in the innocence of childhood, which comes to make his/her First Communion.

The image, decontextualized, was therefore manipulated to serve a message that was foreign to it. Cropped, inverted and taken out of its Catholic religious context, it has been hijacked to make it say something other than what it was originally made for.

Below are other souvenir images of First Communion (also Italian) from the same period (first half of the 20th century).

But what about, therefore, this magnificent medallion also presented on certain Internet pages as being a representation of the couple Jesus / Mary Magdalene (and offered for sale as such on an online site ...)? The only information we have about it is that it is a silver medallion made between the 1880s and 1930s.

The question that should be asked first and foremost is how a goldsmith (unknown, but probably Italian) from the end of the 19th or the beginning of the 20th century could have represented Jesus and Mary Magdalene as a couple when:

- Point 1: This idea of ​​the Jesus / Mary Magdalene couple – popularized by Dan Brown (Da Vinci Code, 2003) – is a very recent phenomenon that dates back at most a few decades[1].

- Point 2: The image is very clearly inspired by the evangelical episode of the Last Supper (reproduced for hundreds of years by hundreds of artists), an episode for which Jesus and John have been known, for two millennia, for be the two main protagonists.

- Point 3: This is a medallion belonging to religious art and coming from a workshop whose production was intended for customers prizing this kind of object, in other words for a Catholic public, pious and ignorant of the point 1[2] but sharing point 2.

[1] Which would amount, so to speak, to asserting that coins bearing the inscription “before Jesus Christ” were struck decades, even centuries before the birth of Jesus ...

[2] The answer is simple. It is clear that the motif is identical and that the attitudes of the characters are the same as in the images we have examined previously. By force of circumstances. One would have to have a timeless and “foolproof” imagination to convince oneself that a fervent Catholic of the 1900s could have been convinced that Jesus and Mary Magdalene were in a relationship, that they had sexual relations and offspring ... At this point convinced, moreover, that this fervent Catholic would have had a medal made to illustrate the scene (!)

The answer is simple. It is clear that the motif is identical and that the attitudes of the characters are the same as in the images we have examined previously.

And this motif is identical to the one found on the souvenir medals of First Communion, also of Italian origin and dating from the same period.

Is it not, to say the least, paradoxical that it is precisely those who denounce an alleged conspiracy of the Church (to hide alleged secrets ...) who, out of ignorance or on purpose, resort to such procedures, in occurrence, misappropriation of images, even falsification?

Pious image of the same inspiration

Certainly, those who only relay the decontextualized, distorted, even truncated document, and accompanied by its fallacious commentary, are not at the origin of the deception. They are only the first victims. But a part of the responsibility falls on them nonetheless: a document whose source is not mentioned and whose origin cannot be verified should not be relayed without the slightest reservation ...

Those who disseminate this picture on the Internet present it as illustrating the close relationship uniting Mary Magdalene and Jesus: a union not only mystical but sexual according to them, from ... 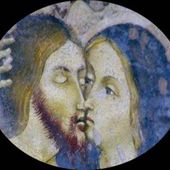