Mary, the bride of Jesus and the mutual kiss

Ridolfi Ghirlandaio, The Coronation of the Virgin (early 16th Century) This article follows “Jesus and Mary: The Kiss”, also published on Overblog Mary, the bride of Jesus and the mutual kiss (Post 2/7)

Yes, Jesus and Mary, his mother, kiss each other on the mouth. This is an ancient tradition to which the Gnostic Gospels also belong.

See, for example, this text of Pseudo-Evodius (not gnostic), written in Coptic, translated by Stephen J. Shoemaker, in Ancient Traditions of the Virgin Mary’s Dormition and Assumption, Oxford / New York, 2004, p. 403.

And just a clarification: at the end of this passage we have the word “Exalted” attributed by Jesus to his Mother. “Exalted”, “Magnified”, here the word is in Coptic. But the corresponding Aramaic word is Megaddela.

Mary, the bride of Jesus and the mutual kiss (Post 3/7)

Jesus calls his Mother “his bride” and promises to kiss her again. This is also an ancient Eastern Christian tradition to which the Gnostic Gospels also belong.

Note that the word “bride” has a spiritual meaning, as does the word “companion” in The Gospel according to Philip.

Mary, the bride of Jesus and the mutual kiss (Post 4/7)

This Coptic text takes up and amplifies the story of the meeting between Mary (called the Magdalene) and the Risen Jesus reported in the Gospel of John (chapter 20, 1-18). For the editor, Mary, who wants to kiss her son on the mouth, is none other than the mother of Jesus. This fragment has been compiled and translated by Eugene Revillout and published under the title “Gospel of the Twelve Apostles, 14th fragment”, in The Coptic Apocrypha, Patrologia Orientalis II, 2, Paris, Firmin-Didot, 1904, p. 169-170.

She [Mary] opened her eyes because they were lowered so as not to look down to earth because of the scandals. She said to him with joy: “Master, my Lord, my God, my Son, you are risen, well risen.”

She wanted to grab him to kiss him on the mouth. But he stopped her and begged her, saying: “Mother, do not touch me. Wait a bit (for) it is the garment that my Father gave me when he raised me up. It is not possible for anything carnal to touch me until I go to heaven.

“This body, however, is the one with whom I spent nine months in your womb ... Know these things, O my mother. This flesh is what I have received in you. This one is the one that rested in my tomb. This one is also the one that is resurrected today, the one that stands in front of you. Fix your eyes on my hands and feet. O Mary, my mother, know that it is me whom you have nourished. Do not doubt, O my mother, that I am your son. It was I who left you in the hands of John when I was on the cross.

“Now, then, O my mother, hasten to warn my brethren, and to say to them... According to these words which I said to you, Go to Galilee: you shall see me. Hurry, for it is not possible for me not to go to heaven to my Father, to meet you no more.”

Mary, the bride of Jesus and the mutual kiss (Post 5/7)

This text, attributed to Cyriac of Behnessa, takes up and amplifies the story of the encounter between Mary, known as the Magdalene, and the Risen Jesus reported in the Gospel of John (chapter 20, 1-18). Once again, for the editor, Mary, who wants to kiss her son, is none other than the mother of Jesus. The text was published by Simon Claude Mimouni, in Ancient Traditions on the Dormition and the Assumption of Mary. Literary, Historical and Doctrinal Studies, Leiden / Boston: Brill, 2011, p. 150.

“But the Virgin remained standing outside the sepulcher, crying for her only Son. As she was, she leaned over to the grave and saw two angels dressed in white. One was sitting at the head of the place where the body of Jesus had been laid and the other at the feet. They said to her, “Why are you crying?” And she answered, “They have taken my Son and my God, and I do not know where they have laid Him!”. After speaking thus, she turned around and saw Jesus standing. She did not realize that it was Jesus himself who was saying to her, “O woman, why are you crying and after what are you looking for?” Believing he was the gardener, she said to Him, “Lord, if it was you who took Him, tell me where you put Him and I will take Him.” The Lord (glory to Him) said to her, “Mary!” After having looked at Him, Mary exclaimed: “Rabbouni!” That is, Master. He said to her, “Do not you believe, O my mother? Look at my face and you will recognize me. I am your Son Jesus, who raised Lazarus from the dead in his house in Bethany. I am Jesus: the resurrection, the truth and the life. I am Jesus who was crucified on the wood of the cross. I am Jesus who consoles you in your affliction. I am Jesus for whom you cry. They did not bring my body as you thought, but I raised up the dead by the will of my Father who is in Heaven, and that to save all the pains that are related to the bonds of sin.”

Having heard this speech, the Virgin took courage and stopped crying. She lifted her face to her Beloved Son and He blessed her. Seeing Him in the splendor of his divinity, she said to Him, “O my Son, O my Lord, you are risen! It is really a good thing that you are resurrected.” Then she bowed to kiss Him. Jesus said to her, “The joy of my resurrection, which you have seen and contemplated, is sufficient for you.”

Mary, the bride of Jesus and the mutual kiss (Post 6/7)

This text of Pseudo-Cyril (Discourse on the Virgin Mary), written in Coptic, was published by E. A. W. Budge, in Miscellaneous Coptic Texts in the Dialect of Upper Egypt, London, 1915, p. 717-718. Once again, the Virgin Mary is called the “Wife” of Jesus (we are here at a spiritual level, not carnal) and they kiss each other on the mouth.

Mary, the bride of Jesus and the mutual kiss: Conclusion (Post 7/7)

About The Da Vinci Code, I wrote the following:

“This extraordinary novelistic fiction, which has been a worldwide success and aroused so many questions and excitement - because it claims to rely (at least in part) on facts - does, however, rest, in all and for all only on two brief passages taken from apocryphal gospels discovered since more than half a century ago: the Gospel according to Philip and the Gospel according to Mary. In these Coptic manuscripts, found in Egypt, one can read:

The companion of the [Son is Marie-]Madeleine. The [Lord loved Mary] more than [all] the disciples; [he] kissed her [often on the mouth].

It is unfailing that the Lord knows her, which is why he loved her more than us.

In this study, we will return to these two passages, which, taken out of context, have been misunderstood.”[1]

Presented in isolation, these texts could have made believe that Mary Magdalene had been the sexual companion of Jesus, that he had children of her and some, who even went so far as to imagine descending from this couple divine, have set up a whole system and built genealogies[1].

But, given in their editorial context, these texts take on a very different meaning (see posts 1 to 6): the Mary of whom speak the Gospel of Philip and the Gospel of Mary, whom Jesus loved more than his disciples, and whom he kissed on the mouth (as was the custom in the East) is none other than his own Mother, Mary “the Magnified”, in Aramaic: Miriam Megaddela.

It is not to offend the Magdalene to make her the Mother of Jesus, on the contrary. On the other hand, if – as my works, which are based on the oldest documentation, demonstrate – she is indeed the Mother of Jesus, it means that it is also she who, in ignorance, was considered for 1500 years old as a prostitute. And some would now like Jesus to have an incestuous relationship with his own Mother!? May those who vilify me because they pretend to love them take the time to think about that. If I were a believer, I would say that Jesus showed extraordinary patience with those who, without knowing, continue to slander them his mother and him!

[1] Concerning these so-called genealogies and these vain genealogical researches, this is what the Apostle Paul was already writing – in a quasi-prophetic way! (History repeats itself) – 2,000 years ago: “But avoid foolish questions, and genealogies, and contentions, and strivings about the law; for they are unprofitable and vain.” (Titus 3, 9). But also: “ Paul, an apostle of Jesus Christ by the commandment of God our Saviour, and Lord Jesus Christ, which is our hope; unto Timothy, my own son in the faith: Grace, mercy, and peace, from God our Father and Jesus Christ our Lord. As I besought thee to abide still at Ephesus, when I went into Macedonia, that thou mightest charge some that they teach no other doctrine, neither give heed to fables and endless genealogies, which minister questions, rather than godly edifying which is in faith: so do. Now the end of the commandment is charity out of a pure heart, and of a good conscience, and of faith unfeigned: From which some having swerved have turned aside unto vain jangling; Desiring to be teachers of the law; understanding neither what they say, nor whereof they affirm.” (1 Timothy 1, 1-7) Jesus calls his Mother "his bride" and promises to kiss her again. This is an ancient Eastern Christian tradition to which the Gnostic Gospels also [...] Given in their editorial context, these ... 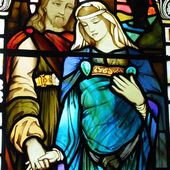 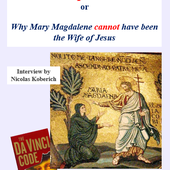 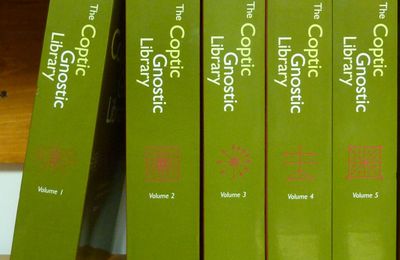 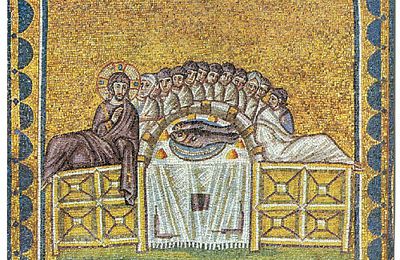