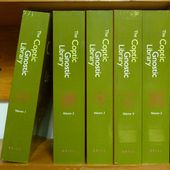 This article is a subchapter of a much longer study (about 80 pages) entitled:

The Mother of Jesus and the Magdalene:

One and the same Mary?

An overview of the Sources

The following passage gave the translators a lot of trouble and was the subject of much comment. The aim of a translation is to clarify the meaning of the text as well as possible, not to obscure it. Thus, I am following the translation of Jacques-Étienne Ménard which remains close to the text and seems to me to have grasped its spirit:

There were three who always walked with the Lord (ϫⲟⲉⲓⲥ):

Mary (ⲙⲁⲣⲓⲁ) his mother, and her sister, and Magdalene (ⲙⲁⲅⲇⲁⲗⲏⲛⲏ), who is called his companion (ⲕⲟⲓⲛⲱⲛⲟⲥ).

For Mary (ⲙⲁⲣⲓⲁ) is his sister, his mother and his companion (ϩⲱⲧⲣⲉ)[1].

This is a key passage made up of three parts. In the first one three people follow “the Lord”. The second part is a rephrasing of John 19:25 (the only passage of the Gospels which attributes a sister to the mother of Jesus and also the only one where the Magdalene is named last). In my opinion, the two central elements of the chiasmus (B-B) have been merged into one (B)[2], like this:

[2] As Van Os recently established, the Gospel of Philip is a well-structured writing: “The document is a conscious three-part composition […] There are probably twelve textual units, some of which are quite well marked by repetitive or chiastic structures”. Bas van Os, “The Gospel of Philip as Gnostic Initiatory Discourse”, in April D. DeConick, Gregory Shaw, John D. Turner (eds), Practicing Gnosis. Ritual, Magic, Theurgy and Liturgy in Nag Hammadi, Manichaean and Other Ancient Literature, Leiden – Boston: Brill, 2013, p. 97.

According to me, there are two characters here. The central character (B) is the sister of the mother of Jesus (“her mother”), and the mother and Magdalene (A) are one and the same character (Mary Magdalene) who is presented under two aspects: “Mary” – the mother – and “Magdalene” – the companion (koinōnos) –. It is the reason why the name of “Mary” is not repeated here before “Magdalene” whereas it is always the case in ancient documents including in the Gnostic texts[1]: as far as I know, “Magdalene” does not exist as such in the early centuries.

In the third part, a slippage has occurred. “Her sister” has become “his sister” and then there is only one character. Mary is presented under three aspects: she is the sister, the mother and the partner (hōtre). Koinōnos and hōtre[2] are synonymous. The text – which “may have been written in Syria”[3] – is clearly linked to the Syriac tradition as is also the case with many Coptic apocrypha (see below). Before the Council of Ephesus which proclaimed the Theotokos, the image of spiritual communion between Mary and her Son was already very strong in the Eastern Church. Thus, this development finds its exact correspondence in the Work of Ephrem. The deacon of Edessa writes in his Hymns (Mary is speaking, addressing her son):

What name shall I give you?

Could I call you a stranger when you have become one of us?

I will call you Son,

I will call you Brother,

I am your Sister, since David is our common ancestor;

and since I conceived you, I am your Mother.

Sanctified by your grace, I am your Bride[4]…

It is the same idea of full spiritual union and the same formula, expressed in the same order: “his sister, his mother and his partner/bride”. Indeed, the theme of Mary, spiritual Bride of her Son, is particularly present in Syriac and Coptic Christian literature (and later in the Latin Church)[5].

The following passage from the same gospel has also been the subject of many comments. The text, which has several gaps[6], is generally completed and translated as follows:

As for the Wisdom (ⲥⲟⲫⲓⲁ) who is called “the barren,” she is the mother [of the] angels. And the companion (ⲕⲟⲓⲛⲱⲛⲟⲥ) of the [Savior is] Mary the Magdalene (ⲙⲁⲣⲓⲁ ⲧⲙⲁⲅⲇⲁⲗⲏⲛⲏ). [The Savior loved] her more than [all] the disciples [and used to] kiss her [often] on her [mouth]. The rest of [the disciples saw him with Mary]. They said to him, “Why do you love her more than all of us[7]?”

But one can translate the first lines as follows:

As for the Wisdom who is called “the barren,” she is the mother [of the] angels and the companion of the [Savior]. Mary the Magdalene, [the Savior loved] her more than [all] the disciples[8]…

As I said, the words koinōnos (borrowed from Greek) and hōtre are synonymous. They mean “companion”, “partner”, “double”, and can be translated in Greek by suzugos, suzugia (syzygy)[9]. In Valentinian Gnosticism, the syzygies are pairs of “Aeons” (emanations of God) and Sophia – the Wisdom, who is also called the Holy Spirit[10] – and the Savior, form together, or are intended to form, a syzygy[11], a couple of spiritual partners. According to the author, Sophia is the companion, the “spiritual twin” of “the Savior”. Mary, as “Magdalene”, is the earthly image of Sophia[12] and can therefore also be called the companion of the Lord[13]. As a result, kissing is therefore important because, as we read also: “For it is by a kiss that the perfect conceive and give birth. For this reason we also kiss one another.”[14] In the Gospel according to Mary, after Jesus’ final departure, it is Mary herself who goes to the distraught disciples, gives them all a kiss and consoles them:

Then Mary stood up, kissed[15] them all, and said to her brethren: “Do not weep and do not grieve nor be irresolute, for his grace will be entirely with you and will protect you[16].

Stephen J. Shoemaker observes, regarding the Gospel of Philip, that various scholars “have come to the recognition that ‘Mary’ in this gospel is best understood as not being a single figure, but rather as a conflation of several different historical women […] Rather, the Mary of Philip is sometimes Mary of Magdala, sometimes Mary of Nazareth, but also a conflation of both[17]”. In my opinion, there were indeed conflations between different figures of Marys. The characters have evolved independently and intertwined. But these conflations are mainly due to the fact that originally there is only one major figure named “Mary” in the Gospels, sometimes presented as Virgin and Mother and sometimes qualified by a specific epithet (to distinguish her in particular from “the other Mary”, the mother of James and Joses).

[2] Hōtre: the one joined to him, his “double”. I would like once again to thank my friend and colleague Nathalie Bosson from the University of Geneva – President of the French-speaking association of Coptology – for this clarification.

[3] Jennifer Chalut, The Characterization of the Magdalene in the Gospels according to John, Thomas, Philip and Mary, Montreal: Concordia University, 2012, p. 111.

[5] The idea that Mary, figure of the Church, is at the same time the Mother, the sister and even the spiritual daughter of Christ is present in Augustine (Of Holy Virginity 5-6).

[7] The idea that “the Savior” loves Mary more than anyone else is also found in the Gospel of Mary.

[13] Not “of Jesus” but “of the Lord” which places this relationship in a dimension which is no longer that of History.

[15] The translator translates as “greeted” but it is the same verb here as in the Gospel of Philip when it is said that the Savior “kissed” Mary Magdalene.

Mary Magdalene and the Gospel according to Philip (Murcia, 2021)

This article is a subchapter of a much longer study (about 80 pages) entitled: The Mother of Jesus and the Magdalene: One and the same Mary? An overview of the Sources (awaiting publication in a ...