Mary Magdalene and the Magnificat 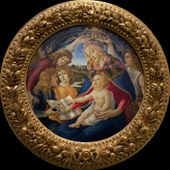 And Mary arose in these days and went into the hill country with haste, into a city of Judah; and entered into the house of Zacharias and saluted Elisabeth. And it came to pass, when Elisabeth heard the salutation of Mary, the babe leaped in her womb; and Elisabeth was filled with the Holy Spirit; and she lifted up her voice with a loud cry, and said :

“Blessed [art] thou among women, and blessed [is] the fruit of thy womb. And whence is this to me, that the mother of my Lord should come unto me? For behold, when the voice of thy salutation came into mine ears, the babe leaped in my womb for joy. And blessed [is] she that believed; for there shall be a fulfilment of the things which have been spoken to her from the Lord.”

“My soul doth magnify[1] the Lord, And my spirit hath rejoiced in God my Saviour. For he hath looked upon the low estate of his handmaid: For behold, from henceforth all generations shall call me blessed. For he that is mighty hath done to me great things; And holy is his name. And his mercy is unto generations and generations On them that fear him. He hath showed strength with his arm; He hath scattered the proud in the imagination of their heart. He hath put down princes from [their] thrones, And hath exalted those who were humble. The hungry he hath filled with good things; And the rich he hath sent empty away. He hath given help to Israel his servant, That he might remember mercy, as He spoke to our fathers, To Abraham and his descendants forever."

And Mary abode with her about three months, and returned unto her house. Now Elisabeth’s time was fulfilled that she should be delivered; and she brought forth a son.

According to Luke, who reports the episode, Mary, shortly after the Announcement, visits her relative Elizabeth. The older woman is pregnant with John the Baptist. Elizabeth blesses her relative who responds to her by singing a canticle known as Magnificat (Luke 1:46-55). This (Latin) name simply comes from the first word (the incipit) of the Latin translation of this song of praise: Magnificat anima mea Dominum, that is: “My soul magnifies the Lord” (Luke 1:46). The Greek text bears: Μεγαλύνει ἡ ψυχή μου τὸν Κύριον.

[1] “My soul exalts the Lord” in the New American Standard Bible.

Although the Gospels were written in Greek (then translated into Latin), Mary – whether the episode is historical or not – is supposed to have spoken in Hebrew or Aramaic. Now, in Hebrew as in Aramaic, the first word of the hymn – Μεγαλύνει in Greek, Magnificat in Latin – is constructed from the root GDL (גדל) just like the Aramaic epithet Megaddela (מגדלא) which means “the Magnified” and which refers to the mother of Jesus. In Hebrew, the first words of the Magnificat – “My soul magnifies the Lord (YHWH)” – can be translated as:

The Hebrew Magdilah corresponding here to the Latin Magnificat.

It is precisely in this way that this passage has been rendered in this Hebrew translation of the Greek text published in 1601[1]:

In another Hebrew translation of Luke 1, 46, published in 1735[1], the first words of the Magnificat were rendered by:

However, according to the conclusions of my works, which were the subject of a first communication in 2009 at the University of Provence and which began to be published from 2015, Mary called “Magdalene” and the mother of Jesus are one and the same Mary. The word wrongly translated by “Magdalene” corresponds in fact to the Aramaic Megaddela which means “the Magnified” and which refers to the mother of Jesus. This aspect of the question was particularly developed in chapter XXII, entitled “Mary of Magdala or Mary the Magnified?”, of my work published in 2017 at the Presses Universitaires de Provence: Marie appelée la Magdaléenne. Entre traditions et Histoire: ier-viiie siècle (pp. 287-307) where all the philological tracks were explored. By acquiring consciousness, I had (before publication) given this chapter to read to Professor Stemberger, of the University of Vienna – one of the most eminent specialists in Rabbinic literature and Semitic languages ​​– for him to verify his relevance and correct any errors. With the exception of one detail, without consequence for our purpose, he had found nothing to complain about.

In the Protevangelium of James, composed in the second century, we read in chapter 12, 1-2: “And she [Mary] made ready the purple and the scarlet and brought them to the priest. And the priest blessed her and said: “Mary, the Lord God has magnified (ἐμεγάλυνεν κύριος ...)[1] your name, and you shall be blessed among all generations of the earth”. And Mary rejoiced and went to Elizabeth her kinswoman, etc.” Through the mouth of the high priest, this text, which depends on Luke, clearly applies to Mary the Magnificat.

“Mary the Magnified”, in modern Hebrew, is Miriam ha-Mougdelet. But in Palestinian Aramaic used in Jesus’ time, “Mary the Magnified” is Miriam Megaddela. Now, in the Babylonian Talmud the mother of Jesus is also – and very precisely – called Miriam Megaddela (מרים מגדלא). The scribes of the Talmud, who express themselves in Eastern Aramaic, have not only kept the correct pronunciation but the correct spelling. These same scribes – who like puns and sometimes cultivate derision – have, however, added to her name the word neshaya (at first), and then sear neshaya (in later manuscripts) to give megaddela the meaning of “hairdresser”. “Miriam the Magnified” thus became “Miriam the women’s hairdresser”. Then, in the Toledoth Yeshu (sort of “counter-gospel”) written in Hebrew, Miriam Megaddela became Miriam Megaddelet.

In the West, the original meaning quickly lost. The evangelists, who wrote in Greek, did not want to propose a translation for Miriam Megaddela. They merely transliterated in Greek the Aramaic word which gave Maria hê Magdalênê and, especially in Luke, Maria hê kalouménê Magdalênê: “Mary nicknamed the Magdalene”. Through the filter of translations and exegeses, Maria hê Magdalênê finally became Mary “of Magdala”: a female figure in which we could see only a different character from the mother of Jesus (who is supposed to be from Nazareth)

Mary Magdalene and the Magnificat (Murcia, 2019)

In Hebrew as in Aramaic, the first word of the Magnificat (Luke 1:46-55) - Μεγαλύνει in Greek, Magnificat in Latin - is constructed from the root GDL (גדל) just like the Aramaic epithet... 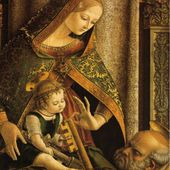 En F rançais Cliquer ci-dessous English version Link below Jesus the "New Adam", Mary The "New Eve" Which Mary? How can Mary, nicknamed "Megaddela" (i.e. "the Magnified One") be called "the ...